There is another approach that may help; Examine the pain. where exactly in your head is it? The temples? (Have you ever wondered why each side of your head is called a temple?) Over your eyes? At the base of your skull? All over your head?

What is the nature of the pain? Is it dull aching? Is it throbbing, stabbing, lancing Burning, Screaming, agonising?

Can you tell where it’s coming from? Is it just there? Or can you discern a faint link to your neck? Or shoulders?

Does the pain come on only in certain situations? With certain activities? Is there any pattern to it? Could it be linked to types of food, water or lack of either? Is it only at certain times? Have you started taking any medication? Could there be a link there? 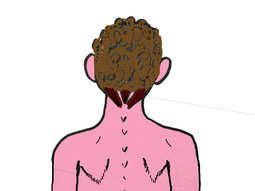 These are all important questions that could make all the difference in being able to resolve the problem. They involve some of the many factors involved in headaches, primarily because they can lead to tension in the sub occipital muscles. ( See to the left in red, the muscles at the base of your skull where your neck joins the back of your head)
The sub occipital muscles

Sub occipital muscles become tight for the same reason that all muscles do, and cause the same reaction. (see why do muscles hurt?) the difference here is that these small, but incredibly powerful muscles attach directly to the facia that covers your skull, facia is connective tissue that in this case covers your skull like a glove and is at least a quarter of an inch thick! What you feel when you push your fingers onto the hard surface of the skull is not the bone under the skin, but a thick, dense layer of connective tissue or facia called an aponeurosis. When the sub occipital muscles go into a progressive spasm they pull the aponeurosis tightly onto the skull reducing blood flow and causing pain. Particularly in certain positions or activities. The pain may be behind the eyes, or in the temples or in the back of the head.

Up to 98% of headaches are caused by sub occipital muscle spasm, and relieving the headaches is as simple as removing the spasm.

Of course, the questions I asked earlier are important because we need to know what led to the sub occipital spasm! All of the subjects mentioned can be a factor, and there are others as well. These factors need to be identified and rectified. Then treatment will almost certainly be effective. It will most likely be effective anyway, but it is always helpful to remove aggravating factors.

Only one or two percent of headaches are caused by the things we are all terrified of, such as tumours or clots or growths, and no matter how long you’ve had headaches for, you are still unlikely to have a nasty reason for head pain, and very likely to have a simple reason for it. (sub occipital tension) which will almost always respond to the correct physical therapy.

There is however one common form of headache that generally will not respond to my kind of work, and that is migraine. Migraines are a true case of  rising  pressure inside the cranium, or skull. Migraines usually have a specific form normally involving extreme head pain, photo-phobia (aversion to light) and nausea (sickness) often accompanied or preceded by what are known as ‘prodromal’ symptoms. This is the appearance of flashing or coloured lights before the eyes and a strange sense of knowing that the migraine is coming.

I have found that migraines can be lessened in intensely and frequency by treatment, but rarely resolved. I remain optimistic that one day I will be more helpful in these cases.
I have worked with an artist who was getting a variety of head symptoms, the worst of which was double vision, and this was obviously affecting his work. Within a few sessions of relieving tensions in his neck joints, his neck muscles, and in the sub occipital muscles, his vision had completely resolved itself. It turns out that some of his other head and neck symptoms were due to an abscess hidden deep in his jaw, arising from an impacted tooth fragment sustained in an accident nearly 30 years ago!

Another patient had been up at least 3 nights per week, for the preceding 5 years, with headaches so bad they had caused him to vomit. It took 3 months of weekly treatments to fully resolve, but we were encouraged with small improvements each week that justified continuing the treatment. With some maintenance work, he remains free of all but occasional symptoms.
More recently I was asked to see a young lady who had spent the previous two weeks with a headache so excruciating that her doctor had sent her to the hospital. An overnight stay and a cat scan showed no obvious problem so she was sent home with painkillers. When I saw her the symptoms were persisting, with nothing seeming to lessen the intensity over the course of the day.
One treatment following the above guidelines eased most of the symptoms, and a follow up a few days later seemed to completely resolve the problem.

So, your visit will involve, as ever, consultation, examination, and treatment. Treatment will involve looking to relieve sub occipital tension, de-congesting drainage areas from the head and finding and treating the underlying causes of sub occipital tension. This may often involve joint manipulation of the neck and muscle manipulation to the neck, upper back, shoulders, and chest. Sometimes even lower back, hips and pelvis, knees or even feet!

The majority of symptoms will be relieved within one to three treatments, some will take longer.

In all, my success rate for treatment of headaches, remains very high (above 90%) and I recommend 1-3 treatments to determine if I can help you.

Back to: where is my pain?